The multinational company Ecoline P/L is proposing a tree based ropes adventure park – “Treetops”- in an environmentally sensitive section of Yarra Flats Park in Heidelberg. Parks Victoria who are the managers of the park are also proponents of the development.

The Treetops proposal is for 4 hectares of precious old River Red Gum forest along the edge of the Yarra River to be alienated from Yarra Flats Park for this commercial operation. 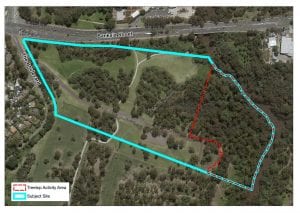 There are 5 trees in the site that very likely predate European settlement, and another 10 that are over one hundred years of age. These are amongst the oldest in the park which, like most of the lower Yarra River corridor, has had the vast majority of its old growth trees removed in the past.

The site covers most of the remaining section of the Banksia Billabong. This billabong was once famous for its bird life but now is usually dry as it has been starved of water for many years. Melbourne Water are doing detailed preparations to re-water this billabong by diverting stormwater into it. The restoration of this ecosystem will be a wonderful asset for the Yarra River corridor but this would be significantly compromised by having an adventure park right over the top of it!

Almost unbelievably Ecoline P/L and their Arboriculturist and Ecologists have made NO MENTION in their reports of the Banksia Billabong, which is right in the middle of the proposal site! Presumably they did not even know that it was there as it was dry at the time.

The soil in the site has been extensively degraded in the past by intensive grazing. This has resulted in poor root conditions for the trees with a resultant high risk of the trees being stressed. River Red Gums that are stressed drop limbs unexpectedly and can even fall over. To make matters worse the Treetops proposal will result in intensive pedestrian traffic in the area that will damage the soil even more. Would you want to putting your life, or your child’s life, at the mercy of trees like these?  River Red Gums are well known as “Widow Makers”. There is also a high risk of introducing weeds and pathogens such as Chytrid fungus that would attack the local frog population. 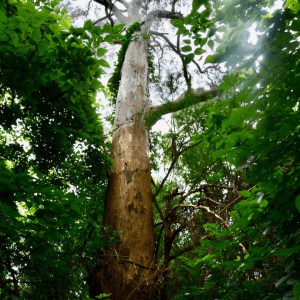 The proposal will involve removal of significant amounts of native vegetation to allow the ropes course to be erected – up to half a hectare in total.  Much of this vegetation will be from the old River Red Gums. On going further removal will occur as required for safety which could be quite substantial in stressed River Red Gums.

The site straddles right across the Yarra River wildlife corridor at a very narrow point. On the other side of the river the Manningham NE Link interchange will severely encroach on this corridor from that side as it is less than 100m from the river.

“The adventure park compromises the capacity of the reserve manager to achieve a positive outcome for biodiversity – the value in the region of the highest concern to the regional resource planning and management body, the Port Phillip and Western Port Catchment Management Authority.”

The proposal goes against the clear direction from the CMA that protection of biodiversity in reserves is a priority as their large area and security offer the most achievable conservation prospects.”

The area is just 600m from Bolin Bolin Billabong on the other side of the Yarra River which is recognised for its high Koori cultural significance – one of the most important in the Melbourne area. There are historic records of the Koori also using and camping at the billabongs in the Yarra Flats Park area, of which the Banksia Billabong was the largest. It appears that consultation with the local Wurundjeri has been inadequate and that Ecoline P/L and Parks Victoria have downplayed any Indigenous importance of the area.

A ropes course like this could be placed in many less environmentally important spots around Melbourne, why put it in such a precious area as this site in Yarra Flats Park?

There is great passion amongst the local community for the area to be properly regenerated into a high standard natural asset, which in conjunction with the adjacent Annulus Conservation Zone and Bolin Bolin Billabong, would be a tremendous sustainable asset for the Yarra River corridor which the whole of Melbourne could enjoy.

How you can help:

Thank you to Andrew Lees from Friends of Yarra Flats Park for providing this information.